No News is No News

For those of you asking how my quarterly trip to CU Denver went, it didn’t.  They called Wednesday morning and cancelled the MRI as we were preparing to go.   Not sure what happened…

Maybe it was because last time they rented the 9.4 Tesla from University of Illinois which failed utterly to produce and the doctors didn’t want to make the same mistake again.

Even though the world’s most powerful MRI machine has a magnetic field three times stronger than regular clinical devices, the team of distinguished neurologists, after a few very tense, hand-wringing hours, threw up their hands and wailed in disgust while spewing their highfalutin and confusing-to-the-lay-person medical jargon,

“Like broheim we have to tell you man, we are most displeased to inform you that we are like incapable of capturing Polaroid-ifiums of your mental chrome-dome-isphere; like your snail gel is most un-copious.  We can’t even find your brain man. Where my dear are you hiding that thing? Such an uncool noodle!  And this MRI mega blows!  We are so totally bummed!”

Or maybe the machine was just flat broken and they had to call AutoZone or the Xerox guy or Doc Brown or whoever to drop ship an array of new flux capacitors and they were back ordered on Amazon and then the drones weren’t “cleared hot” for delivery to south eastern Denver so they had to send Mr.T in the A-Team van to go pick them up but they got stuck on I-25 in traffic or something.  Idiots!  They probably should have taken the toll.  Dunno. 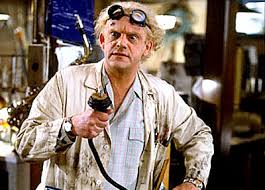 Either way, I don’t have any news. Have not rescheduled yet but should be in the next few weeks.  As soon as there is something to share we will let you know.

Thank you for your prayers, well wishes and love.

Oh and now for my favorite Back to the Future quote, a la Doc Brown, “If my calculations are correct, when this baby hits eighty-eight miles per hour… you’re gonna see some serious $#!+.”

That said, here’s to hoping that the 9.4 Tesla, or even some skinnier version with 3 times less magnification, sees the same or even improved $#!+ between my noodle-sphere.

Peas be with you in meantime and nanu-nanu and all that and what not and whither for.