You are browsing the site archives by month.

Incline on Friday, Barfing on Saturday, Clueless on Sunday

If you research how to write blogs, you will find that almost invariably one author or another recommends the use of “Top 10 Lists.” This particular medium on the internet is prolific. Inventories of things can be useful, grab your attention, and are easier to read/write. They exists for everything from “Things to do with a Glass of Water” to “Places to use when you can’t find a restroom…” Two things that are not by the way, necessarily, mutually exclusive.

Anyways, I’m itching to pen these kinds of posts and, frankly, feeling a little resentful at the moment that I don’t seem capable.

The first one I’d write would be something along the lines of “Top 10 Things You Should do to Defeat Ulcers” or “Seven Simple Steps for Curing Melanoma…So Simple in fact Even Your Cat Can Do It!” These speak to me. I might even pay money for the e-books; or if feeling particularly cheap and/or lazy have our cat Leo buy them and fill me later.

Like I said though, it’s not happening.  Life doesn’t seem to be fitting cleanly into the paradigm.  Case in point has been the last few days. Friday I hit the Manitou Incline with Alan (aka ‘Grandma’ aka long time running buddy and chief weekend excursion and concert conspirator).  We haven’t done something like this in a while and it was great.

For the uninitiated, the Incline is an old railway above Manitou Springs that was washed out @ 35 years ago and has since become a popular hiking destination.  It’s got something like a 70% grade in places and you climb 2000 feet in less than a mile 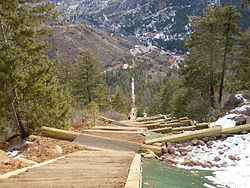 …Bad-ass…if you are slightly touched in the head or looking for a unique challenge, or, maybe in my case, both.  It’s one of the few exercises I’ve done where I consistently see stars (ah like not the sky) and, at about the half way mark, I’m usually reminded of the time I told someone I was going for a run and he responded, dumbfounded, “From what Dude?”

Either way, I’m grateful to be able to do stuff, even slightly touched stuff, and despite being @ 20 minutes slower than the last time I did it 10 years ago (we reached the top on Friday in 45 minutes), it was still awesome to be out there suffering on the side of the mountain.

Yet, on the way down something was bothering me.  I’ve had ulcers along with inflammation in the stomach for the last several years. Ulcers are basically open soars in the stomach or in my case duodenum (first part of small intestine leading to jejunum, um before the ileum) and, to use more medical terms, they can really suck. I happen to have the sucky ones. They were starting to turn on full sucky power during the meandering, three or four mile run back to the car.

Thought I had handle on these, I keep/kept thinking.

If you query on the subject you will find that @ 90% of ulcers of the duodenal variety are caused by H. Pylori bacteria.  However, a biopsy of my ulcers did not demonstrate any hp.  The doctors surmised it was treatment /chemotherapy induced.  Wish it was the bacteria.  There is a clearer path to victory in that case (heavy duty antibiotics for a few weeks and antacids).

After a few ER visits, endoscopes and barrage of tests ad nauseum, supplements, Dr visits, prescriptions yah dee ya dee ya, we really thought we had this licked.  In my case, we believed, the issue was a combination of a newly developed lactose intolerance and, strangely, a lack of stomach acid.  Taking digestive enzymes for lactose along with hydrochloric acid did the trick.

Unfortunately a couple of weeks ago the pain returned.   I realized I’d slacked on the remedy described above and got back on the wagon so to speak. However, the thing is, it does not seem to be working. And the really lousy thing is, the burning almost always leads to full blown brush fire…thus the visits to the ER.  I had one of those a week ago and within the last twenty four hours.

Yesterday it started at Connor’s hockey tryouts with the imperious urge to projectile vomit in the bathroom, timed between his shifts on the ice of-course.

I guess that’s the definition of slightly obsessed, when you are slugging it out at the ice rink to watch your son play rather than home gyrating in pain.  Either way, it was worth it to have him look up at me when he was heading off the ice and nod when I gave him the thumbs up for this performance. I’m not biased or anything but what a great kid! The effort alone was worth price of admission.

Anyways, barfing turned to copious barfing at home and severe abdominal pain.  The next six to eight hours were, as mentioned, kind of sucky.  Thanks to some prescription nausea meds (again, thanks Alan) things finally calmed down and I did not have to go the hospital.  We were to down the wire though…I was giving it a another hour before limping to the ER.

So, here I am, Sunday evening, typing this blog, feeling slightly shell shocked, wondering what to say while scrapping the rusty, dried up bottom of the barrel of faith…wishing I could summarize “it all” cleanly into a neat, attention grabbing and snappy list.

The only thing that comes to mind is that I’ve been through other ups and downs before; and, as much as the temptation is to think otherwise, there’s always an up.

What Grandma said on Friday during our slow ramble up the incline seems perhaps most appropriate,

“Everything works out in the end…so if it hasn’t worked out yet, it isn’t the end.”

When it does you’ll find it here, next to “Top 8 Reasons Why Guys Who Pick their Noses Really are Smarter.”

I’m playing hooky from work for a few days this week.  Would like to tell you that I’m taking this time to devote to a series of productive and extremely manly honey-dos but, chances are and knowing me, most of that time will actually be spent committing honey don’ts or their wicked step cousins, oh-no-you-didn’ts.

Speaking of which, Elsa decided to take me for a run this morning. I guess she thought I needed it.  Didn’t sleep much last night and was feeling a bit, persnickety. Have been “dealing” with ulcers as a byproduct of previous immunotherapies as well as current keytruda regimen. It felt like I stopped by the grill in the backyard and swallowed a few hot coals on the way to bed.  Running usually helps relieve and/or remove the pain when I’m symptomatic. Waa-waa-waa.

So off we went to the Mt Herman Trailhead, which is a confusing name for the path that actually does not take you to the top of Mt Herman; rather meanders around its foothills through a dense pine forest, pond, and Monument Rock (picture). I usually do a loop that is basically uphill for the first half.

It was during the last bit of climbing that I ran into a couple of guys mountain biking.  They had stopped at the the “top” or the highest part of this particular route to catch their breath, grab some water, take in the view, or perhaps watch me, Thunder Cat, crawl his way to the top.

We struck up a conversation (they talked, I gasped) and because I’m kind of on a evangelistic tear right now I happened to mention, in reference to my breathing, “Yeah not too bad for a guy diagnosed with Stage IV terminal cancer and 98 brain tumors a few years ago…”

There’s probably – okay probably maybe certainly – an element of crow going on here.  Boasting or not, this is a story I feel the need to share these days.  Not sure I care to perform any further self examination on the subject beyond that, at the moment.

The thing is though, if I’m going to take the talk from run-of-the-mill, trail based pleasantries like ‘ha ya doin’ and ‘beautiful day isn’t it’ or even ‘that last part kind of sucked,’ to deeper topics of cancer and survival, then I better be prepared for heavier caliber conversation.

“Mind if I ask how your relationship with God is?”  One the guys asked.

My instant reaction was to think, ‘Huh? I don’t know.’

But that’s not really how you are supposed to respond in that situation right?  Not when you have been sober 24 years and regularly swear in a room full of your peers, “it’s only by the grace of God”; or faced with a life threatening illness find yourself alive and saying, “Thanks be to God.”

So instead, I answered the question by not answering the question, “Well, I go to church…”

The truth is, in relation to my belief, some days are better than others.  There are a lot of moments when I feel the opposite of “sure” about anything. I’m barely making it up the trail let alone feeling confident about life, God, me, you, us, them, the Cubs chances this year…

Here I can hear the gruff voices of a few old guys with the inflated spare tires around their waists (aka “boomer bellies”) and steaming Styrofoam cups of coffee in their hands.  Their talking to me in cliches, derivatives of,

“The older you get the more you realize how little you know.”

“The only thing I know is that I know only a little.”

Oh well, guess it could be worse.  Perhaps the fact that these statements ring true- combined with my own expanding waist line – means I’m getting older.  Older = good. (-;

PS. Elsa was not working on ulcers but she definitely succeeded in wearing herself out.

Or maybe it was the after breakfast snack she had on the trail?