Last weekend I tried to play my part in the hirsute movement with a 5 or 6 o’clock shadow; okay, closer to 2 or 3 o’clock (a.m.).  Granted it was a weak showing with no hipster cool handle bar mustache, mouth brow, grass grin, flavor savor, chin curtain, goat tee, or fu manchu to be had… more like a scraggly, Shaggy outcropping and an altogether poor excuse for “beard.”

Yet, while my lame attempt may not have heralded a new epoch in men’s facial hair, make no mistake it was historic. You see last weekend somebody insinuated that I, Leland Fay 44 years old, old-but-not-that-old-at-least-I-thought-until-now, am a ‘Grandpa.’ 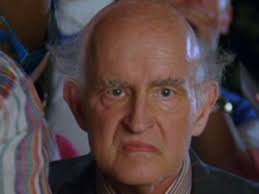 The exact words were, while out on a walk talking to a lady about my puppy dog Elsa, ‘Oh you’re grand kids must love her.’

I think my response was a wilting, “Err yeah.”

Okay not really, or whatever, um kind of, croaked.

Either way its the beard’s fault man. That stubble done-done me wrong.

Since starting on the various medications for cancer 3.5 years ago my facial hair has gone from dark to salt and pepper to white. Now I’m ‘paying’ for it. Gonna think twice, maybe, the next time I decide to forego a razor for a few days. Will say to myself, “Leland says I, snap out of it, you are not looking all George Clooney more like Col. Sanders.”

Then again, perhaps I can take comfort in knowing that clean shaven might be a better option, health-wise, in the long run. I’m thinking about this article I read in the NY Post awhile back entitled, Bearded men have poop on their faces.

Note: If you have been reading any of my posts for the last three months, it should not surprise you that somewhere in the back of my hairy brain I remembered reading this and a weird synapse fired.

Here’s the quote from feces on face article:

According to a group of microbiologists in New Mexico, the rancid bacteria that beards collect could be putting owners’ health at risk. Microbiologist John Golobic, of Quest Diagnostics, swabbed a number of beards searching for bacteria for the study and found that some of the bacteria “are the kind of things that you find in feces. I’m usually not surprised, and I was surprised by this,” he said. “There would be a degree of uncleanliness that would be somewhat disturbing.”

Ha! Take that beard masters of the universe, maybe, but wait…

Is a little bacteria necessarily a bad thing? Not enough microbes in the diet, on our hands, or in our hair a harbinger or perhaps another symptom, on a macrobiotic level, of possible environment crisis? This article is wild, “How the Western Diet Has Derailed Our Evolution.” Scientists were shocked to find that an isolated tribe in Africa harbored a far more diverse and complex set of intestinal bacteria than average modern man. In turn, that tribe had virtually no incidence of modern disease.

Many who study the microbiome suspect that we are experiencing an extinction spasm within that parallels the extinction crisis gripping the planet. Numerous factors are implicated in these disappearances. Antibiotics, available after World War II, can work like napalm, indiscriminately flattening our internal ecosystems. Modern sanitary amenities, which began in the late 19th century, may limit sharing of disease- and health-promoting microbes alike. Today’s houses in today’s cities seal us away from many of the soil, plant, and animal microbes that rained down on us during our evolution, possibly limiting an important source of novelty.

And you may recall, and as previously discussed a few weeks ago, that having the right microbes on board can potentially play a critical role in the success or failure of immunotherapies (the treatments I have been on).

From a recently published article in Science Daily

Introducing certain bacteria into the digestive tracts of mice with melanoma can help their immune systems attack tumor cells. The gains were comparable to treatment with anti-cancer drugs known as checkpoint inhibitors. The combination of bacteria and anti-PD-L1 nearly abolished tumor outgrowth, report scientists…Checkpoint inhibitors such as ipilimumab (Yervoy), nivolumab (Opdivo)  and pembrolizumab (Keytruda) have had a dramatic impact on treatment of several tumor types, including melanoma, lung cancer, head and neck cancers and others. But only a minority of patients — one-third or less — have a vigorous response. Cancer researchers have wondered why so few benefit…They found that introducing the bacteria was just as effective as treating them with anti-PD-L1 antibodies, resulting in significantly slower tumor growth. Combining the benefits associated with the bacteria with anti-PD-L1 treatment dramatically improved tumor control…

So, alright, I dunno.

Maybe I need to cultivate a facial fro, for health reasons. Never gone the distance, you know like more than a week without a straight edge, but perhaps its time…

Not sure how “tickled” Sarah will be with this; but hey if its for health and I can live with the Grandpa “bristles”, I should perhaps do it. And there’s that old saying about how ‘being old is a privilege, denied to many.’ So true.

This little excerpt from Frasier doesn’t really fit as a way to end this post, but’s its funny and better than my, um, balding “tickled” and “bristles” humor.