The escape before the escape

Everybody loves a great escape. It’s woven into our story telling fabric. Joseph Campbell talked about it in ‘Hero with a Thousand Faces.’  Looking at countless myths from an exhaustive list of cultures throughout recorded history, Campbell found a cadence and rhythm. The same blueprint sits stolidly behind westerns, romances, action flicks, comedies, crime dramas in Greek, Latin, English, Spanish. The pattern represents universal, eternal themes woven into our collective understanding of what makes a “great” story, whether we are blissfully unaware or not as we park it before the Saturday matinee with a bag full of popcorn.

So what about escapes? Where does Houdini fit into the hero’s journey? Let’s see stage 8, ‘THE ORDEAL’ …near the middle of story, the hero enters a central time and space to confront death and/or face fear.  Out of the death he or she emerges with new life. Think Luke Skywalker getting dragged under the water in the trash compactor (Lucas was a celebrated Joseph Campbell fan); or Snake Plisskin in “Escape from New York” forced to fight the super fat dude which seems sure to equal super fat dude death; or Sally telling Harry they can no longer be friends after a spontaneous late night tryst.  In each case we’re left wondering if our heroes are goners this time, if its indeed over for our fearless friends; only to have them return from the abyss, often possessed with new powers and abilities. There are, if you want to get metaphysical, some even deeper and more powerful stories. This is death/life/rebirth/escape story is some primal stuff that resonates with us.

Anyways, I got to thinking about this the other day when a friend of mine forwarded me an article about some of Stephen Hawkings latest work with black holes. B-holes have been one of the biggest, baddest boogie men of modern science, so big and mean that only analogies seemed capable of describing these cosmic prisons, deepest darkest pits, demons that swallow everything, neither light or thought can escape. The black hole problem – namely the impossibility for escape and the reality bending implications they had for the theory of general relativity – has been swallowing up scientists since Einstein proposed them.  There was, many concluded, indeed no hope and no escape…um until the news the other day when Hawking announced he had, that he and some fellow erudite dudes proved it was possible to climb out of the hole, at least from the relative comfort of their 2-D chalkboard, .http://www.nytimes.com/2016/06/07/science/stephen-hawking-black-holes.html

This got me thinking though about what it is that enables an escape to occur in the first place…What do you do when confronted with a doozy? Its sucking you down or perhaps has already swallowed you whole and your a-stewing in acerbic juices? Its probably clear what we shouldn’t do in these case, if we can help it, however tempting that may be.  I mean what if Luke says “That’s it I’m done;” or Snake lays down so Slog can beat him pulpless; or Harry decides its pointless to go find Sally…”forget it man I give up.” Not a great story in those cases unless you are like writing an “art film” and come to think of it that is probably still going to make for a pretty crappy story (sorry, I bow before the universal story telling pattern).

The first step to getting the hay out of a black hole seems to be willingness. The willingness to believe that perhaps-maybe-possibly-conceivably and despite the “evidence” (real, imagined or otherwise) that a problem can be solved. This the escape before the escape. If Hawking and Co never said “maybe” there would be no newly published solution.  And then there is this whole question about precedence. I mean did the solution not already exist before they proved it did? Just cause it is an equation on a whiteboard now, that doesn’t necessarily mean that it wasn’t  already on the chalkboard right?

I found this hopeful for reasons I can’t quite articulate or fully describe…and wore out my delete and backspace keys to prove it to myself here. Either way, back to metaphors. I mean what does a black hole really represent? When I read the article I thought of stage 8, the ORDEAL, as in death – perhaps the greatest black hole someone, anyone, has to face. Good/bad/right/wrong, atheist or believer or I-don’t-know-er, will men/women someday be able to mathematically show there is no death? The foundations seem, at least to my simple mind, already there. Thoughts never really die. Light never actually fades. They just go somewhere else. The universe is constantly recycling. Just because we have not ‘proven’ life goes on does not mean it does not already go on, whether we know it or not. I mean they just kicked a black hole’s ass right? What’s next man?

This applies to cancer as well. I have had 98 black holes in my head and many more in my lungs, liver, and stomach. Does this mean, when the doctors gave me the news there was no escape? Apparently not. I’d do well to be willing to maybe-possibly-conceivably believe that the next time I am faced with a cosmic dark spot in my universe. Hope you will as well.

“Suspended in the air

The words you didn’t hear are coming from friends

Today you throw your head back in the wind.” 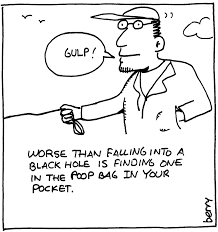